The vibration analysis of aero-engines is highly relevant, since vibrations are known to significantly contribute to a large number of engine failures. The Vibration University Technology Centre at Imperial College London has been developing and validating tools for over 30 years now, that allow accurate modelling of linear and nonlinear responses of sub-assemblies (eg. bladed disc assemblies or under platform dampers) or Whole Engine Models, but experimentally there is a lack of understanding on how the entire engine, responds to a dynamic excitation in detail. Recent efforts, such as the Asynchronous Rotor Excitation Rig (ARES) at Imperial, have started to address some of these issues, but the question on how a real engine vibrates, remains largely un-answered. Engine vibration data, both from test beds and in flight, can normally provide some indication of what is or has happened, but measurement noise, sparse spatial and temporal resolution, and the wrong sensors in the wrong place, can often make a reliable interpretation of the vibration data very challenging.

The Holistic Engine Rotor MEasurement System (HERMES) test facility, which has been installed at the Vibration UTC under the CORNERSTONE project, is intended to provide this missing understanding of how an entire engine under rotating conditions responds to well controlled excitation, in order to ensure mechanical integrity of the whole system. The taken approach thereby is to mount a small scale engine (GNOME) to a test bed (see Figure 1), and drive it via electric motors to high enough speeds for a realistic dynamic behaviour. The system operates in a low-pressure environment, to minimise the required drive power but more importantly minimise the aero-elastic interaction with the structure, to focus purely on structural dynamics. A very dense exciter and sensor network has been installed across the rotating and static components of the engine, to excite many different locations with harmonic and transient forces, and to study their effect on the local, but more importantly, global dynamic response of the engine. Advanced signal processing techniques that are currently being developed under the CORNERSTONE project, can be used to automate the large-scale data capture, reduction and interpretation and allow the generation of relevant informative vibration maps of the engine. 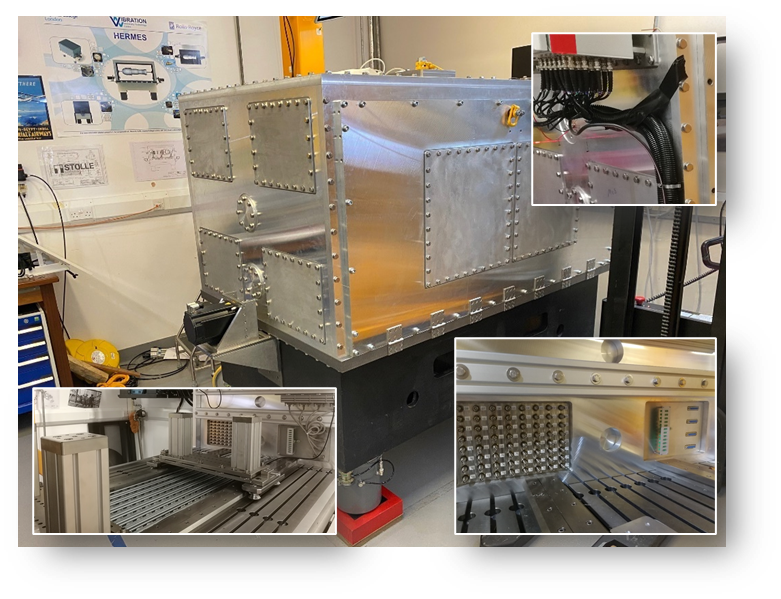 The focus of Cornerstone WP3 research is on a reliable interpretation of vibration data due to blade failure, but HERMES provides a multitude of other opportunities in the future to address many of the questions that are unresolved today.

The excitation of the HERMES test article (Gnome engine) requires the simulation of a blade off event. To simulate such an event, a controlled out of balance force must be applied instantaneously in a known location of the bladed disk. For the Hermes rig, it was decided that this blade off event should be simulated in the turbine section. A novel out of balance excitation system has been designed for that purpose that provides different levels of unbalance masses, in different orientations that can be released at any time during a test run. 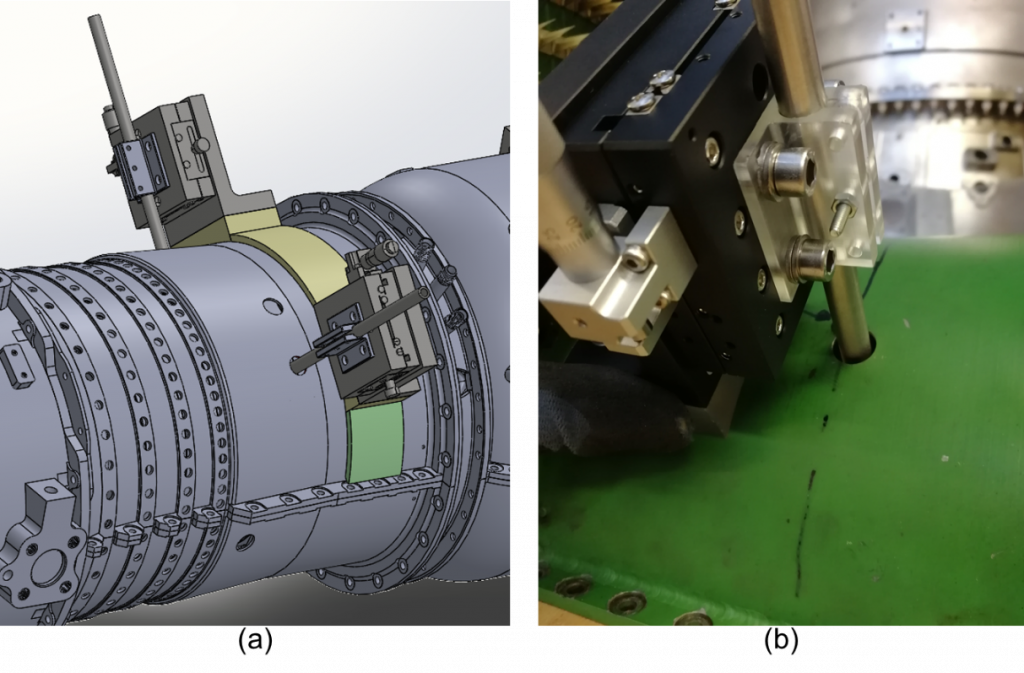 Figure 3 Sample instrumentation on the GNOME engine, a) design and b) installation

Engine vibration testing is a difficult task, the success of the testing procedure is dependent on many elements of the process. From a technical standpoint, it requires capturing large numbers of data points from multiple sensors at different sampling frequencies, that may come from a variety of sensors, such as accelerometers, blade tip timing systems, strain gauges, torque meters, and other. Acquisition of these signals produces a vast amount of data. Such large amounts of data might be not only difficult for the engineers analysing it but they also require fast and reliable storage. Therefore, data reduction methods are necessary to minimise the amount of storage space and processing capacity required to efficiently analyse the acquired data. With large amounts of data it is also important to use wherever possible automation in the data analysis process which allow detecting novelties, outliners, or previously unseen behaviours of the system. As part of WP3 new data analysis techniques have been developed that allow to intelligently reduce, analyse, tease apart and interpret the acquired large amount of data to highlight relevant events, and later lead to understanding and developing technology to interpret reduced data sets for rotor condition monitoring applications.

Phase-space analysis is mainly being used to study dynamical systems as it shows the state of a systems and its evolution in time with respect to the dynamic variables. It is possible to distinguish steady state and transient responses by analysing trajectories in the phase-space (or a part of it) of dynamic system response. A harmonically forced system when settled tends to have a steady orbit in the phase-space, while looking at a phase-space diagram of a transient response may multiple crossing random like trajectories. The phase space also contains information about the dynamical behaviour of the system and its complexity, and hence has been used to automate the data interpretation of the HERMES rig.

Christoph SchwingshacklDoctor
Dr. Schwingshackl is a Reader in Mechanical Engineering at Imperial College London. He is the Deputy Director of the Rolls-Royce sponsored Vibration University Technology Centre (VUTC) and the Structural Dynamics Team Lead within the centre. His main research interest is structural dynamics of aircraft engines with a focus on the experimental and analytical analysis of linear and nonlinear frictional damping and rotor dynamics. In CORNERSTONE he is developing a novel test facility that allows to study whole engine vibrations in a well-controlled experimental environment.

COVID was as unwelcome in the CORNERSTONE project as it was everywhere else. It slowed progress in a number of ways but has not deflected us from the main objectives and neither has it undermined the value of the work. Clearly, the virus had a major negative impact on the aerospace industry in the short term and no aerospace company or airline went unscathed in this. It is a significant tribute to the far-sightedness of Rolls-Royce and to the importance of the work being done that the company continued to honour its original commitments to fund the programme notwithstanding the adverse conditions. One other positive that has at least some linkage to COVID is that society in general became accustomed that very significant changes in practice can happen when they have to and with climate change now wreaking havoc regularly around the world, there has been a realisation that the nettle of decarbonising aerospace must be grasped sooner rather than later. CORNERSTONE set out “to replace design-by-evolution with design-by-revolution” and the methods being developed within the programme have become proportionately more important and more urgently needed as a consequence.

The main negative effect arose from the need to work from home for many months and avoid visits. Two CORNERSTONE conferences proceeded notwithstanding (one fully virtual and one hybrid physical-virtual) but the ability to visit between the universities was severely hampered. Laboratory work suffered due to the direct effect of being unable to have people present and due to the indirect effect on suppliers. A secondary effect that arose in at least two cases was that researchers appointed to the project could not join/return due to travel restrictions. Notwithstanding these difficulties, a comprehensive experimental programme has been put underway in the case of most workpackages and will deliver important results in each one of those. The consortium is extremely grateful to EPSRC for the accommodation of an extension in the end date of the award to April 2023. Without this accommodation, the negative effects would have been significant.