Structural integrity in almost all modern machinery is concerned with the avoidance of fatigue, the insidious process by which a crack forms and then grows under pulsating load towards a critical size where the remaining material cannot tolerate the stress present and brittle fracture ensues.  The propagation of cracks has been well understood for half a century through the subject of fracture mechanics and, although there are refinements to be made in the process, the overall process of predicting crack growth rates is reliable.  What remains elusive is the way cracks nucleate. Some freely initiate from material defects and others at local stress raising features necessarily incorporated into components, but others start from where components are fastened together forming notionally static contacts. These are inevitably heavily loaded because forces are localised there, and there is yet further amplification of the stress towards the edges of many types of contact where cracks start, and it is this phenomenon which is the subject of this workpackage.

The most well-known example of cracks originating from a contact edge arises in the roots of fan blades (Figure 1.1), and this is practically of the very greatest importance because a crack growing from a fanblade root may lead to detachment of a blade and lead to the loss of the engine.

It is observed that cracks, when they do initiate from contacts, do so invariably at the edge of the contact and his means that the environment in which nucleation occurs is very well defined indeed, within one of no more than three possible classes of contact (a) convex (like the fanblade root), (b) conforming (like a shaft spline) or (c) receding (like many types of bolted joint). The process of nucleation must be investigated experimentally, because the micromechanics of what happens are not completely understood, and the mechanism varies from alloy to alloy. Our philosophy is therefore to investigate fretting fatigue strength using servo hydraulic test apparatus in the laboratory, Figure 1.2.  This shows one of a pair of sets of equipment which have been developed as part of Cornerstone to conduct the tests, and each involves using several actuators to simulate both slowly varying loads and vibration. Each has been designed to induce a very general set of loading conditions at the contacts and, in particular, at the contact edges.

Separately, extensive analytical investigations have been done to encapsulate the conditions at the contact edge using as few parameters as possible and, in many ways, these solutions mirror the very well-known crack tip solutions (with attendant stress intensity factors) used in fracture mechanics.  These ‘local solutions’ may be collocated into both the prototypical contact edge geometry and into the very simple ‘pad geometry’ employed in the laboratory.  This means; (a) that the contact edge conditions are matched to the laboratory test with very great fidelity, and (b) that the results known may be applied to a wide range of geometries by using the rigorous matching process developed. Examples of failed specimens from fretting tests are shown in Figure 1.3. 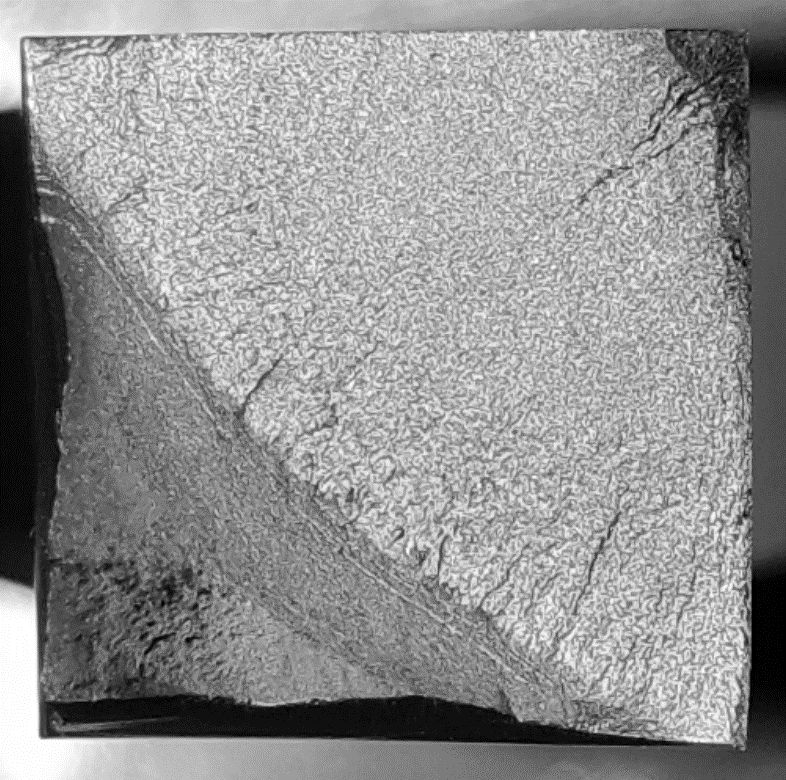 If we look in a little more detail at the specification of both the analysis and the experiment, we see that there are three relevant quantities; (a) the (local) normal load and contact pressure, (b) the local shear force sustained and (c) the underlying tension(s) in the components.  These three things, and how they vary with time, must be matched between prototypes and test apparatus, and it is the analysis, which employs asymptotic forms closely related to the crack-tip solutions, but applied to the contact edge which enables us to do this.  Although the normal load does change during a loading cycle it is the combined effects of shear force and underlying tensions which have the largest cyclic variation, and which, together, combine to form a ‘mode II’ contact edge intensity factor, ΔKT.  A basic result from the test work done is a correlation between this quantity and the number of cycles to failure, and this is displayed in Figure 1.4.  It shows the classical ‘S-N curve’ behaviour with a distinct threshold, and this is correlated with the long crack threshold stress intensity factor, ΔKth. Notes that the symbols on the right hand edge are ‘runouts’, that is they actually correspond to an infinite life or ‘no failure’.  Further work is looking at the weaker effects of varying normal load on the life, but the most important aspect of this is that the laboratory tests reveal material properties and that these may then be applied to a very wide range of contacts; they are not geometry-specific. 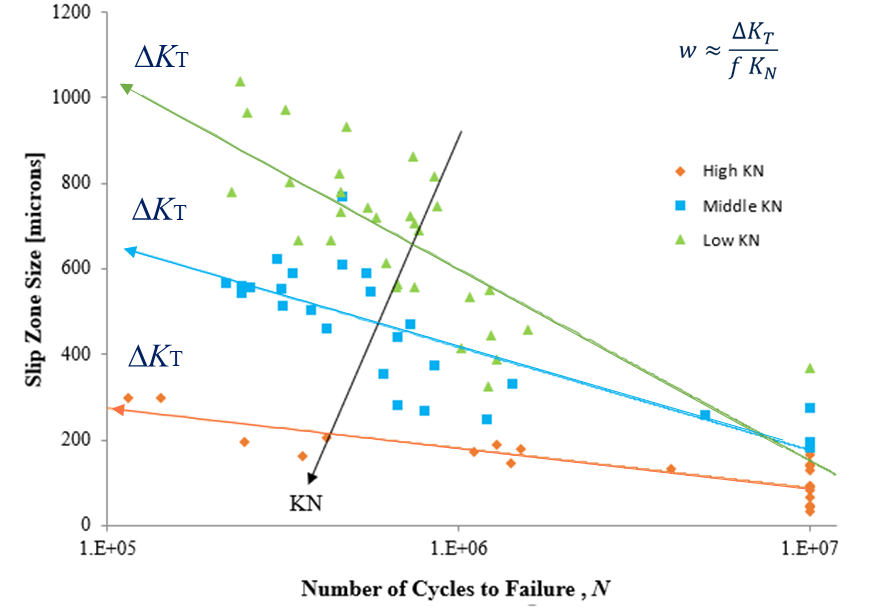 Many contact problems include surface treatments which are usually there to provide a significant reduction in the value of the coefficient of friction, so that, rather than being in so –called partial slip, where the ratio of the shear  to the normal force is less than the coefficient of friction, they slide.  Some other feature in the design of the contact limits the sliding displacement.  It follows that the endurance of the any proprietary treatment or grease is important to the life of the component, and a second type of apparatus to investigate this has been developed, Figure 1.5. This, unusually, use an annular contact which we believe is helpful in aiding fundamental understanding because the contact area has no leading or trailing edges – only the sides where the treatment can escape – and this may be controlled. 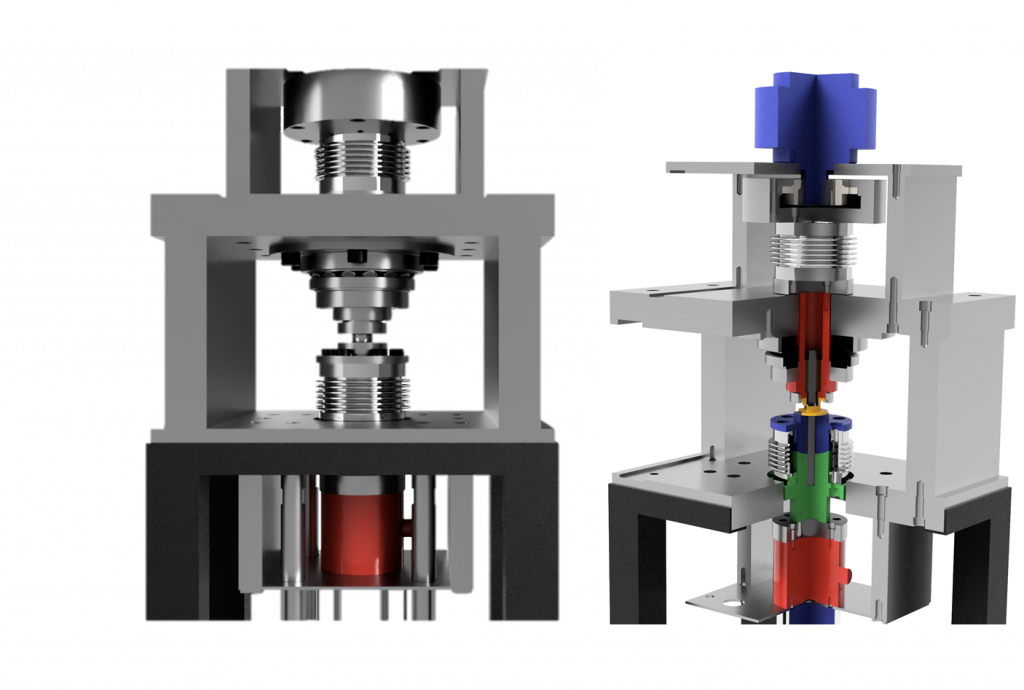 The Cornerstone project has permitted us to make big strides in quantifying the problem of fretting fatigue, and in developing a design criterion for designing against it.  The result is novel apparatus, physical insight, and a reduction of the problem to one where geometric and material properties are isolated from each other, so that the results are of universal value. 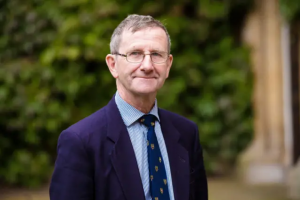 David HillsProfessor
David Hills is a Professor of Engineering Science at the University of Oxford and a Fellow of Lincoln College. He has held these positions (or sometime a junior version of it in the case of the University) for nearly 38 years. His interests have always been in the mechanics of contact and fatigue, subjects which are brought together in the cornerstone project, and in which he has published four monographs. His interests span both the experimental and theoretical sides of the topic.

We did our best to keep going and theoretical work continued pretty well unchecked. The workshop was closed from March 2020 until August 2020, and that was at a key time.  We certainly lost some time in rig development.  Also, although it is only indirectly because of Covid, the supply of specimen material from RR was greatly delayed, and that certainly set back the testing programme.  The reason that there is a chain of events is that, as you know,  RR lost a lot of key people including a number of those with an interest in the project and who were responsible, at the time, for arranging materials supply.